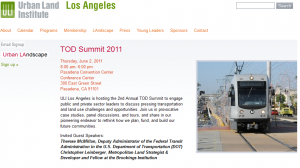 Construction Authority CEO Habib F. Balian will be speaking today, Thursday June 2, 2011 at the Pasadena Convention Center for the TOD Summit 2011 presented by the Urban Land Institute. During the morning session he will be providing an update on the Foothill Extension from Pasadena to Azusa as part of a panel discussion of the status of major projects in LA County. He will highlight some of the Transit Oriented Development Success stories from Phase 1 (Los Angeles to Pasadena), which will also be discussed during an afternoon session and at a walking tour of Pasadena stations.