The following excerpt appeared in the San Gabriel Valley Tribune on March 12, 2018. To read the full article, click here. 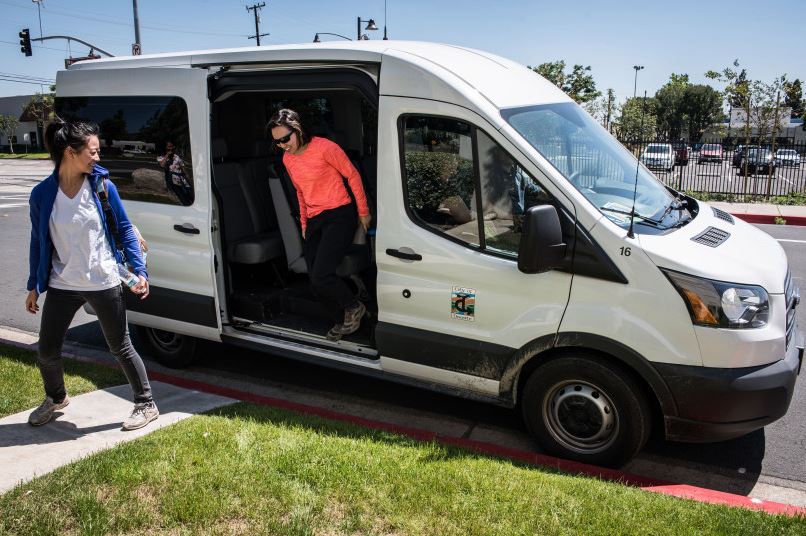 Arcadia resident Jennifer Lui, 24, left, steps out of the shuttle with Azusa resident Victoria Sun, 27, center, at the dropoff point next to the City of Hope/Duarte Gold Line Station in Duarte, Calif., on Saturday April 16, 2016. (Correspondent photo b Michael Ares)

You have to go back about 100 years — to the hair-raising rides on the Mount Lowe Railway — to experience the last mass transit ride from Pasadena to the San Gabriel Mountains.

On April 7, the next one begins

Though not quite an E-ticket ride like the curves of Lowe’s incline railway provided, this one also will get you to Pasadena and then to the trail entrance that climbs atop the mountain named after the inventor and transit pioneer, Thaddeus Lowe. Lowe’s funicular from Rubio Canyon and railway into the wilds of the San Gabriels front range took 4 million passengers between 1893 and 1936.

Funding from Southern California Edison and The Trust for Public Land will help launch a transit-to-trails connection from the Gold Line train’s Memorial Park Station in Old Pasadena to the Sam Merrill Trailhead at the north end of Lake Avenue.