The following article appeared on Streetsblog LA on July 8, 2016. 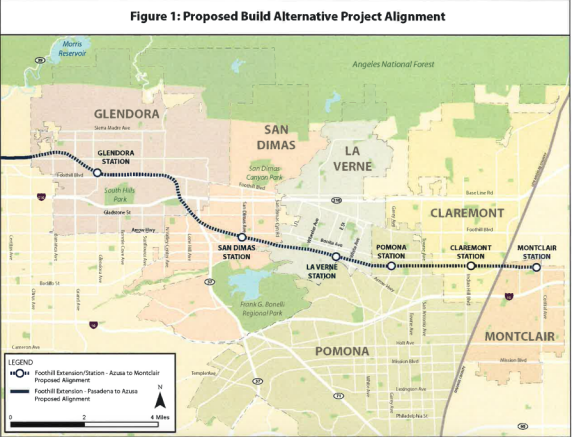 Last March beneath the omnipresent San Gabriel Mountains, the Foothill Gold Line’s Pasadena to Azusa extension opened up to residents and commuters alike. Financed by Measure R sales tax returns, the Pasadena to Azusa extension opened to higher-than-expected ridership numbers, indicating the growing region’s desire for increased light rail connectivity and a commuting alternative to jam-packed traffic on the 210 Freeway.

This November, voters will decide the future of the Gold Line expansion to Glendora through Montclair. The Foothill Gold Line Construction Authority is eager to secure additional funding to initiate the $1.2 billion extension which will add 12.3 miles of rail and six new stations located in the cities of Glendora, San Dimas, La Verne, Pomona, Claremont, and Montclair. The project, though slated to begin in 2019, could break ground as early as 2017 depending on voters approving Metro’s Measure R2 sales tax. The current estimated completion is within a three-year range from 2025-2028.

Officials hope that the Glendora to Montclair extension will be financed through the R2 sales tax increase, officially now known as the Los Angeles County Traffic Improvement Plan. If passed, R2 will apportion $1.2 billion to the Foothill Construction Authority to build the Gold Line to Claremont, the last extension city located in L.A. County. The easternmost terminus, Montclair Station, is located in San Bernardino County, so the San Bernardino Associated Governments (SANBAG) is expected to contribute supplemental funding for their station.

The extension, according to Foothill Gold Line Construction Authority CEO Habib Balian, is positioned to be the first project ready-to-go into construction following R2 approval. Having already completed itsenvironmental clearance (Environmental Impact Report – EIR) in 2013, the advanced conceptual engineering for the extension is expected to be finished by this September. Balian noted in a phone interview:

Strategic elements of the project, including the alignment, station parking, the station area site plan – all of those details will be released to the cities by September. Contingent on the sales tax measure approval, we’ll be the first project ready to go into construction.

Though slated by Metro to begin 2019, the Glendora to Montclair extension could hit the ground as early as 2017 with R2 approval. Source: Foothill Gold Line Construction Authority

Gold Line Authority officials mentioned the potential of the Glendora to Montclair segment to catalyze equity, local development, and sustainable transportation benefits throughout the region. In a 2006 Transit-Oriented Development (TOD) study, officials noted that, from Arcadia to Montclair, there was a potential 1,200 acres of “opportunity sites” – all planned for by the six cities served by this upcoming extension.

In addition, the extension will open up access to key destination sites for the San Gabriel and Pomona Valleys, including over two dozen colleges and universities, the L.A. County Fairplex, and the San Gabriel Mountains National Monument.

The Glendora to Montclair segment also holds the potential of increasing inter-county connectivity. The initial extension is planned to end in the San Bernardino city of Montclair. There have been talks between officials about a potential Ontario Airport extension, with additional San Bernardino County stations. However, according to Balian more SANBAG support is needed for the idea to become a reality:

We would defer to SANBAG and the cities of San Bernardino County to help develop the extension to the airport. There hasn’t been the unanimous support to move ahead with a study at this point. We hope when the time comes, there will be support. Montclair has a large inter-regional transit center and high-capacity bus, rail, and car parking areas, so it’s a great place for this line to terminate – even if it’s temporary.

A Montclair terminus is also expected to provide much greater parking capacity than the current extension Azusa terminus stations, currently experiencing a high demand for limited free parking supply. As of the most recent 2016 March EIR, the Montclair Station would include the Montclair transportation center’s 1,600 existing parking spaces, much more than the current 200 allocated Metro stalls at the Azusa Downtown Station. Until November’s R2 vote, however, residents will not know whether and when the next Gold Line extension will become a reality. Balian stated how critical the next few months will be for the future of the Metro Gold Line:

Right now, we’re not thinking about after R2 – we’re focused on November and interested in making sure people understand the readiness of this project and its potential to improve lives for residents in the San Gabriel Valley and Inland Empire.

Note that there are also plans afoot to extend the Eastside Gold Line into South El Monte and/or Whittier, separate from the Foothill Gold Line extensions.

SBLA coverage of San Gabriel Valley livability is supported by Foothill Transit. Foothill Transit has been a leader in sustainable transportation for years. And now they’re committed to having a 100% electric bus fleet by 2030. To celebrate, Foothill Transit is giving away prizes and sharing facts about how their electric buses help clear the air. Visit Foothill Transit’s e-bus sweepstakes webpage to see how you can join in the eco-friendly fun!

How to impact the future of train, mass transit service in the Inland Valley – Inland Valley Daily Bulletin
City of Azusa to Lease 145 Spaces to Metro for Station Parking – Streetsblog LA