The following article appeared in the San Gabriel Valley Tribune on September 23, 2015. 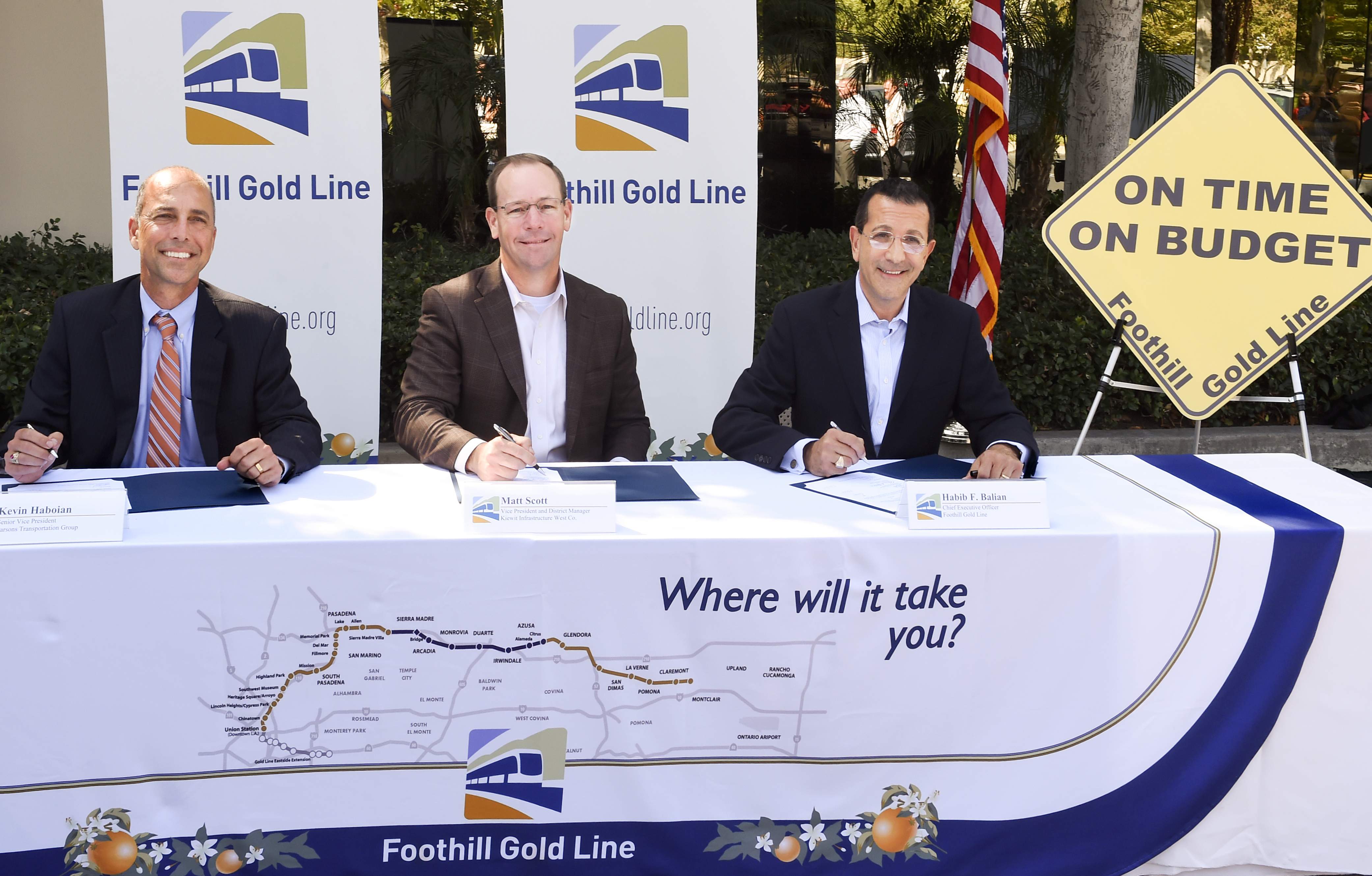 MONROVIA >> When Habib Balian signed the documents certifying substantial completion of the $1 billion Foothill Gold Line extension Wednesday, he glanced at partners from Kiewit Infrastructure West and Parsons Transportation Group, reminding them the pens were not theirs to keep.

The CEO of the Foothill Gold Line Construction Authority made the lighthearted remark as cameras recorded the historic day for the five-year project, which extends theLos Angeles-to-Pasadena light-rail line from east Pasadena to the Azusa/Glendora border at Citrus College and Azusa Pacific University. Indeed, it was Balian who rode the contractors hard to keep the project within a tight budget and on schedule, putting the Sept. 23 completion date on its website more than a year in advance.

“I’m most proud of the fact that we are on time and on budget. That says a lot,” said a beaming Balian, after certifying the 11.5-mile extension was ready for use by the Los Angeles County Metropolitan Transportation Authority (Metro).

At 1 p.m., Balian’s agency transmitted the paperwork to Metro, officially turning over the project to its future operators. Metro Chief Executive Officer Phil Washington said he would announce when passenger service would begin 30 days after the turnover. Balian said Metro has estimated passenger service would start sometime in the spring.

In a written statement, Metro says it must complete training of train operators and emergency responders before the line can be opened.

Last year some wondered if Metro would get enough rail cars from Kinkisharyo International in Palmdale to run the extension, but Balian indicated no roadblocks exist today. Many of those cars have arrived and have been doing test runs since mid-December.

“There are no indications there will be a delay,” he said. “They are interested in taking control of the project and putting it into operation.”

The extension runs through Pasadena, Arcadia, Monrovia, Duarte, Irwindale and Azusa. The first contract was in June 2010 to build a railroad bridge over the 210 Freeway near Santa Anita Avenue. The bridge was completed in 2012. The parking structures and lots at each station were finished in late August.

Balian said he expects the new line to easily meet projections of 13,600 daily riders. He believes many drivers of the increasingly jammed 210 Freeway are looking to ditch their cars to get to Pasadena or Los Angeles.

“Folks need to get out of their cars. There are riders on the 210 in the San Gabriel Valley who we believe can now have another option,” he said.

The Gold Line Foothill extension is the first project funded by 2008’s Measure R sales tax to be completed. The Expo Line Phase 2 from Culver City to Santa Monica will be turned over to Metro in late October or early November, said Gabby Collins, spokesperson. It may open around the same time as the Foothill Gold Line.

About $50 million was left over from Measure R’s allocation, allowing Balian to begin engineering and design work on Phase 2B, from Azusa to Montclair. He’s hoping that project gets construction money from the next county transportation tax, dubbed Measure RX.

“We will be the first project shovel-ready,” he said.

Claremont Councilman Sam Pedroza, who attended the signing, says events like this, plus the recent station dedications in Irwindale, Azusa, with two stations, Monrovia, Arcadia and Duarte/City of Hope will keep Metro and the public aware the line should reach the Inland Empire.

“This starts the momentum moving for the next phase,” he said.