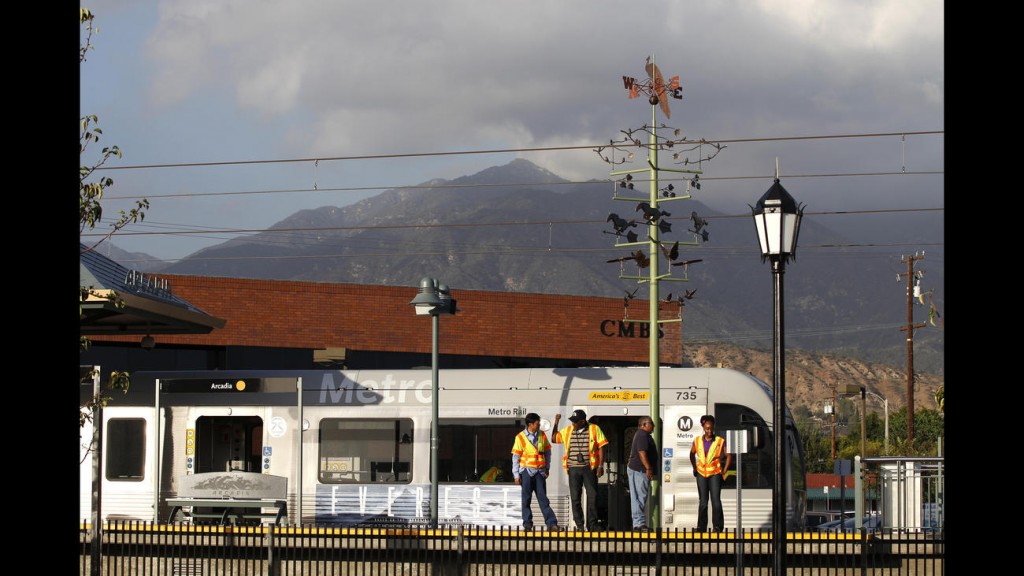 Residents of the bedroom communities stretching eastward across the San Gabriel Valley have contributed more than $1 billion in sales taxes over the last six years to accelerate the expansion of Los Angeles County’s rail network.

In the spring, they will see one of their first major returns on that investment.

The Metropolitan Transportation Authority said Thursday that an 11.5-mile extension of the Gold Line will begin carrying passengers between Pasadena and Azusa on March 5.

The so-called Foothill Extension, costing $975 million, is Metro’s most suburban rail line yet, aimed at connecting a long row of cities such as Arcadia and Duarte with commercial hubs in Pasadena and central Los Angeles.

And officials have already begun advocating for a plan, backed by L.A. Mayor Eric Garcetti, to push the line farther inland, to the San Bernardino County border.

“I completely support the Gold Line going further east,” Garcetti told reporters after a press conference at Metro’s downtown headquarters. “Getting out to Claremont is incredibly important to me.” 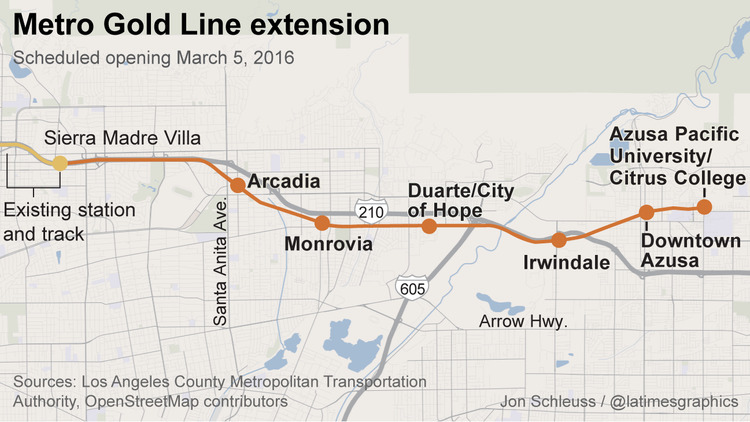 Such a system addition would bring Southern California closer to another major milestone. With the completion of the $1.4-billion Downtown Regional Connector, scheduled for 2020, passengers would be able to ride from one end of the county to the other on a single train — close to the reach of the Pacific Electric streetcars in their heyday.

Heavy construction on the Foothill Extension, which is managed by a local construction authority, began in 2010 and finished a month ago. Before the line can begin serving the public, Metro officials must complete tests on tracks, train cars and street crossing safety equipment.

The travel time from Union Station to a new terminus near Azusa Pacific University is expected to be about 48 minutes, Buch said. Trains will run every 12 minutes during rush hour, and less frequently during off-peak periods.

The Gold Line currently has about 44,000 boardings per day along the route connecting Union Station and the Sierra Madre Villa stop in Pasadena. The extension opening in the spring will add about 13,500 daily boardings next year, Metro said. By 2035, there should be 66,000 passenger trips per day between downtown and the new Azusa station, according to Metro projections.

In a prepared statement, Metro board Chairman and Los Angeles County Supervisor Mark Ridley-Thomas said the Foothill Extension would “provide a relief valve” for the 210 Freeway.

“Metro is delivering on its promise to lead a transit revolution,” Ridley-Thomas said.

Azusa Mayor Joseph Romero Rocha said the arrival of the Gold Line reminded him of his childhood. As a toddler, he boarded Pacific Electric streetcars in Azusa to go to the dentist in Monrovia, holding his mother’s hand and gazing out the window at Duarte and the San Gabriel River.

“I got to see the world pass by,” Rocha said. His hope, he said, is the extended rail line will do the same thing for a new generation of San Gabriel Valley residents.

“Many of our students and families have never been to L.A.,” Rocha said. “The train passes through some beautiful neighborhoods. It’s going to open up a whole new world for them.”