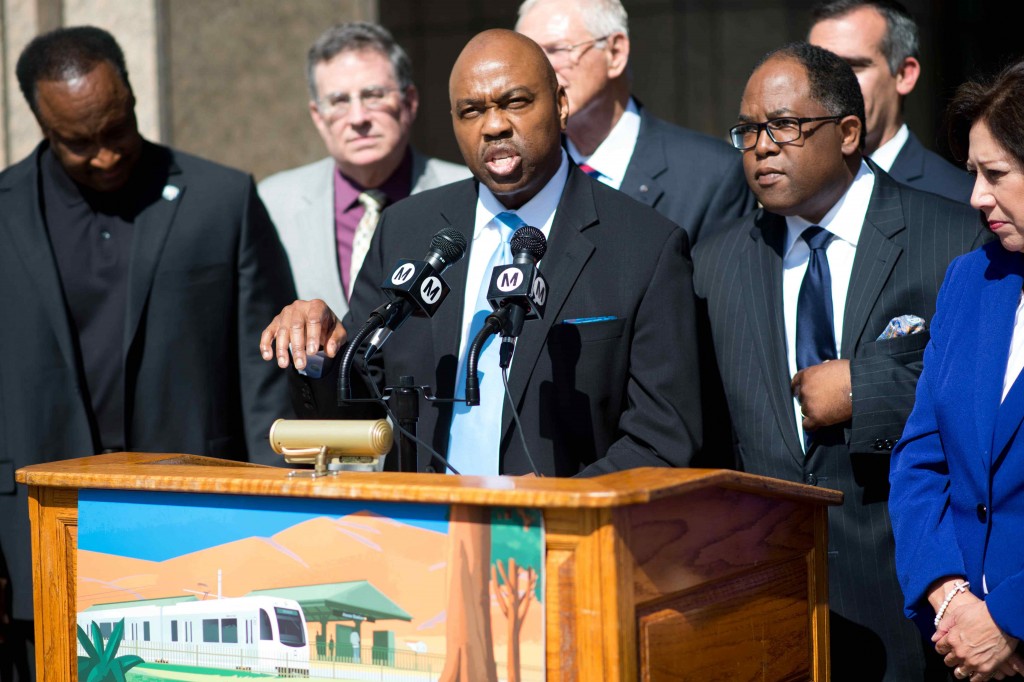 On Thursday, Oct. 22, 2015, Metro CEO Phillip Washington, along with Metro board members, announced that March 5, 2016 will be the opening day of the Gold Line Extension from east Pasadena to the Azusa/Glendora border. Watchara Phomicinda/ San Gabriel Valley Tribune

The 11.5-mile extension of the Gold Line from east Pasadena to the Azusa/Glendora border will begin taking passengers March 5, Metro officials announced Thursday.

Metro CEO Phillip Washington expects ridership to start at 13,600 per day and trains to arrive every 12 minutes. Current ridership on the East Los Angeles-to-Pasadena Gold Line is slightly more than 40,000 passengers per day, above early projections.

The highly anticipated announcement came one month after the five-year, $1 billion extension was completed by the independently created Foothill Gold Line Construction Authority. Once operational, the Gold Line will mark the eastern most point of any rail line in the county and will bring the total rail miles operated by the Los Angeles County Metropolitan Transportation Authority (Metro) to 99 miles.

The line extends from the Sierra Madre Villa Station in east Pasadena through six new stations: Arcadia, Monrovia, Duarte/City of Hope, Irwindale, Azusa Downtown and Azusa Pacific University/Citrus College. The line parallels the busiest portions of the 210 Freeway, which backs up eastbound from 2 p.m. until 8 p.m. and westbound from 6 a.m. until 10 a.m.

Relief was etched in the faces of local council members who’ve worked for a decade to extend the line along the leafy, bedroom communities of the San Gabriel Valley. Some have battled with a Los Angeles-dominated Metro board and previous Metro CEO Art Leahy who favored west Los Angeles subway projects over the Foothill Gold Line.

“Yes, this is so worthwhile,” said former Glendora City Councilman Doug Tessitor, a member of the Gold Line Joint Powers Authority Board and a Gold Line advocate for 12 years. “Anyone who sits and spends two hours a day on the 210 Freeway knows how important this is.”

Though the Glendora to Claremont Phase2B is next, that portion is not yet funded and will cost a little more than $1 billion.

Come March, the line will terminate at the two Glendora colleges, both of which are prepping students to take the train instead of driving.

Geraldine Perri, superintendent/president of Citrus College, expects the opening to increase enrollment, now at about 15,000.

“So many of our students are Hispanic and often they’ll say they didn’t go to college right away because of lack of access,” she said. “They don’t own a car or their family doesn’t have more than one car so only one child gets to go.”

APU, a Christian university, will start a social media campaign in the Spring semester along with pep rallies in the fall encouraging incoming students to ride Metro Rail, said Ginny Dadaian, APU spokesperson.

She often gets calls from students asking about mass transit options.

“These students are mindful on how to be good citizens of the Earth that God gave us,” Dadaian said. “They already use our own trolleys to get between our two campuses here in Azusa, so this will be second nature for them.”

Balian said his office finally has an answer to tell anxious callers.

“We get at least a dozen calls a day from folks wondering when we’ll go into service,” he said. “We’re happy to tell them now that March 5 is the date.”

Metro is testing the new P3010 train cars, as well as the electrical power and safety systems. Each new rail car must run 1,500 miles on the new tracks before being put into service, Washington said. He said the pre-revenue testing is on schedule.