The following article originally appeared in the January 5, 2013 edition of the San Gabriel Valley Tribune. 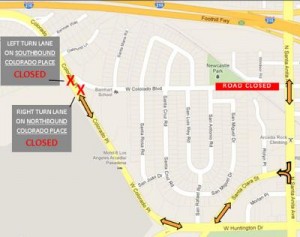 ARCADIA – Colorado Boulevard between Santa Anita Avenue and San Antonio Road began a nearly five-month closure Monday to allow for the building of the first of three bridges on the city’s streets needed for the Metro Gold Line Foothill Extension.

The Colorado Boulevard bridge is one of more than 20 bridges being rebuilt or modified for the $735 million, 11.5-mile Foothill extension from Pasadena to Azusa.

The stretch of Colorado Boulevard will be fully closed 24 hours a day, seven days a week with no vehicle, pedestrian, bicycle or any other traffic allowed through April 30, officials said.

The work will be performed by Foothill Transit Constructors, a Kiewit-Parsons joint venture, generally from 7 a.m. to 6 p.m weekdays and periodically on the weekends, officials said.

During the nearly 5-month closure, residences and businesses in that area will have to be accessed by using San Juan Drive or San Rafael Road instead of Colorado Boulevard.

Right and left turn lanes from Colorado Place onto West Colorado Boulevard will be fully closed. Thru-traffic will be detoured to Colorado Place and Santa Clara Street, officials said.

The old Santa Fe freight line bridge on Colorado Boulevard was removed last year and the 210 Freeway Bridge, under a separate contract, has also been completed. But this is a significant construction effort within the city for the actual Gold Line alignment, said Arcadia City Engineer Phil Wray.

“They’ve done a lot of prep work but this is probably the first actual construction effort in the city and this will carry on for the next 1.5-to two years,” Wray said. “This is just the start.”

Both the left and right turn lanes from Colorado Place onto Colorado Boulevard will be completely closed, Wray said. The reason is that in the past, when the street was left partially open to residents, commuters disregarded the signs, drove into that neighborhood, caused a big traffic jam and discovered they could not get out, Wray said.

While “a couple” of neighbors have expressed concerns about the closure at Colorado Place and Colorado Boulevard, residents there are generally supportive of the project, said Lisa Levy Buch, a Construction Authority spokeswoman.

Once the Colorado Boulevard bridge is complete in April, another Gold Line bridge will be built across Santa Anita Avenue in Arcadia at the railroad tracks, which is a six-month project. Work on the Huntington Drive bridge around Second street is expected to commence in November with an anticipated completion date of February 2014, she said.

The Construction Authority has opened a new Arcadia community office at 400 North Santa Anita, Suite 101B that is open Mondays and Wednesday from 8:30 a.m. to 4:30 p.m. The purpose of the office is to “make it easy for people to walk in and ask questions,” Buch said.

Residents with questions or concerns can also call the Foothill extension’s project hotline at 626-324-7098.