The following article appeared in the Pasadena Star-News on December 28, 2015.

For additional information on the Rose Parade, click here for the Pasadena Star-News parade guide. 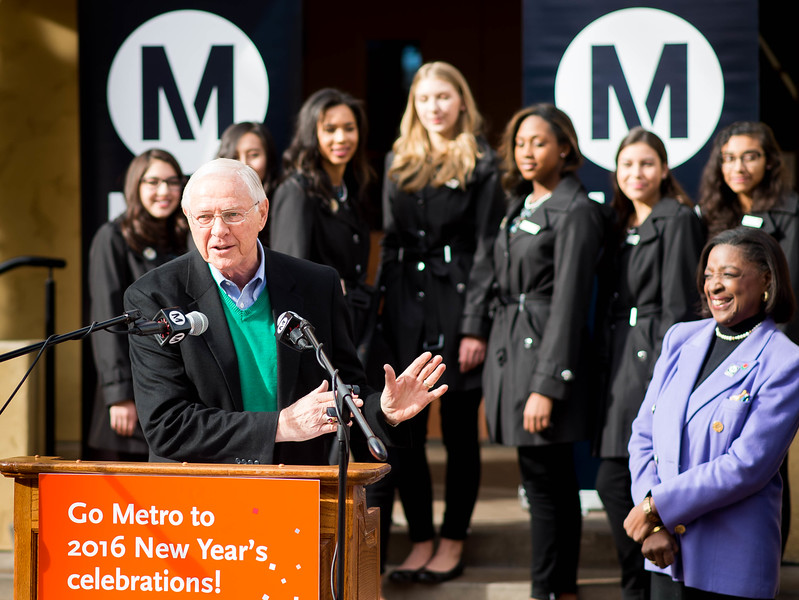 Supervisor Michael Antonovich speaks during the press conference to promote the public to use the light rail to Rose Parade and the Rose Bowl Game on New Years at the Del Mar Gold Line Station in Pasadena on Monday, Dec. 28, 2015. (Photo by Watchara Phomicinda/ Pasadena Star-News)

The 2016 Rose Parade theme “Find Your Adventure” takes on an unintended meaning for hundreds of thousands of people descending on Pasadena starting New Year’s Eve.

Driving to the Rose City — a city that more than quadruples its population during the Rose Parade, Rose Bowl game and float viewing — undoubtedly becomes an adventure filled with freeway jam-ups, road closures and parking hassles.

Metro advises skipping those unwanted adventures by reaching Tournament of Roses festivities via bus or train — while the car remains at home or at a Metro park-n-ride lot outside the city.

Four stops on the Los Angeles-to-Pasadena Metro Gold Line are near the Rose Parade route: Memorial Park and Del Mar stations are located about two blocks from the route; Lake and Allen stations are about four blocks away. Football fans attending the 1:30 p.m. game Friday between Iowa and Stanford can exit the train at Memorial Park and walk three blocks west on Holly Street to the Parsons Engineering Parking Lot B for a free shuttle to the game.

Last year, the Gold Line set a record of 40,000 boardings on New Year’s Day. This year, the transportation agency believes that number could reach between 50,000 and 60,000, said Jackie Dupont-Walker, Metro board member during a press conference at the Del Mar Station Monday morning.

“If anyone has been to the Rose Parade in the past, you know how challenging it can be to find parking and to navigate the local streets,” she said. “I know from my many 3 a.m. attempts.”

Metro will run all its lines — the Red, Purple, Gold, Blue, Expo and Green, as well as the Orange and Silver dedicated bus lines — throughout the night on New Year’s Eve (Dec. 31 – Jan. 1) to bring revelers from Long Beach, L.A., the South Bay and the San Fernando Valley to a viewing spot along the 5.5-mile parade route, or a seat at one of the numerous bars and restaurants in Old Pasadena, without ever getting behind the wheel.

Whether ringing in the new year at a tavern or grabbing a piece of Colorado Boulevard sidewalk, Metro will provide free rides on all its bus and rail lines from 9 p.m. Thursday to 2 a.m. Friday, Jan. 1. After 2 a.m., regular $1.75 fares go into effect.

However, Metro will not allow oversized items such as umbrellas, chairs and coolers on trains that day.

Metro invited the Rose Queen and her court to ride the Gold Line, which was expanded 11.5 miles from East Pasadena to the Azusa/Glendora. Passenger service begins March 5.

During the ride from Del Mar to Sierra Madre Villa stations, Winter and the Royal Court chatted about attending a basketball game and played to nearly a dozen cameras. Winter, 18, a senior at Flintridge Preparatory School, said she was introduced to the train by her school.

2015: A year of accomplishment and anticipation – The Source
The top 10 environmental stories of 2015 (#3: Foothill Gold Line) – San Gabriel Valley Tribune