The following article appeared in the Thursday March 16, 2012 Edition of the Los Angeles Times. 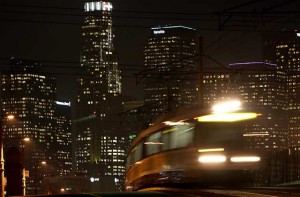 The Metro Gold Line from downtown to Pasadena saw the biggest spike: up nearly 22% over boardings from a year earlier.

Orange Line commuter traffic also carried significantly more passengers than a year ago, up by 18%, and the Blue and Green lines also drew more commuters as gas costing nearly $5 a gallon put the squeeze on many household budgets.

Metro spokeswoman Gayle Anderson attributed some of the increasing ridership to technological improvements the service introduced last year, such as next-bus or next-train arrival information that riders can access on their smartphones.