The following article appeared in the Inland Valley Daily Bulletin on May 9, 2015. 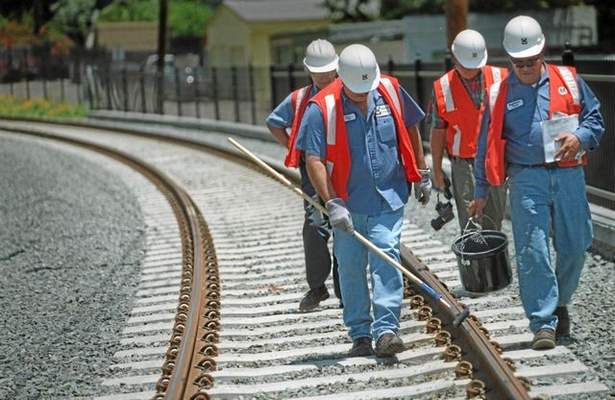 After two-thirds of a century, light-rail transit could be making a comeback in the Inland Empire, if funding is secured from Los Angeles County.

But if everything goes well for supporters and the agency planning the project, it could be another eight years before Inland Empire residents could take a light-rail system to Los Angeles or Pasadena from cities like Montclair or Claremont.

The Metro Gold Line Foothill Extension Construction Authority is in the midst of advanced engineering for the third phase of its light rail system, which would bring the line from Los Angeles, through San Gabriel Mountain foothill communities, to the Montclair transit center. Officials have been meeting with local Inland foothill residents about the plan, in addition to discussing designs and layouts for the proposed stations and parking.

A similar system – the Pacific Electric Red Car line – was available for residents in the early 20th century, until it was discontinued in the 1940s.

“Continuing the Foothill Gold Line to Montclair will be a game-changer with more than 18,000 people taking the train every day between Azusa and Montclair alone,” said Habib Balian, chief executive officer, of the Metro Gold Line Foothill Extension Construction Authority. “Those are people going to work, school, shopping, etc., and not using their cars. That reduces pollution, congestion and improves the overall quality of life.”

He added that each city along the route is planning land-use developments around their future stations, allowing more people to live and work closer to public transit.

“We have seen the benefits all along the Gold Line since it began operating in 2003, and it is significant,” he said.

Andrea Walters, a Claremont resident and an economics professor at Cal State LA, was at the Claremont station on Friday, where she uses Metrolink trains to commute to work. She said she supports the Gold Line because it would reduce traffic on the highways and would help spur economic activity.

“Any time you increase access from communities to communities, you increase the flow of labor so more people can find jobs and start businesses, and from an economic perspective, any time you have a free flow of labor, you’re going to have lower cost and more efficiency because people can get jobs they are better suited to without having to suffer through huge transportation costs, so it makes more sense for any community along that line.”

The Los Angeles County Metropolitan Transportation Authority is considering placing a half-cent sales initiative on the November 2016 ballot to fund the Gold Line and other projects.

If the money – $1.18 billion for phase 3 from Azusa to Claremont – was made available in January of 2017, planners say the project wouldn’t be completed until 2023. And then there’s the matter of funding for the project past the Los Angeles County line from the Claremont Transit Center to the Montclair Transit Center.

Gold Line officials say the cost to build the mile-and-a-half-long line to connect the two stations would be about $55 million, which would be obtained through San Bernardino Association of Governments, or SanBAG, the agency that oversees transportation in the county.

Montclair City Manager Ed Starr said he’d been informed by SanBAG that cost for construction would be $72 million, based on their estimate and that the agency didn’t have the funds available, save for $2 million annually for operations and maintenance. Starr said local officials would make efforts to acquire funding for the project from the federal government, and California’s cap-and-trade program, which collects revenue from companies seeking carbon emission allowances and then provides the revenue for worthy projects that help reduce carbon emissions, such as rail projects.

Starr also said that Montclair has committed to spending $2.16 million for planning for the last leg of the project, and has drafted agreement documents to be considered by SANBAG by July that would reimburse the city for the cost.

Balian said that if the money to take the line from Claremont to Montclair is unavailable in the near term, there is the option of building to Claremont and then coming back to the last leg as a separate fourth phase, though he said the cost could rise to $155 million as a standalone project.

Rep. Norma Torres, D-Ontario, said she’s been involved in the project since she was on the Pomona City Council and during her time in Sacramento as a California assemblywoman and state senator. In the assembly, a bill she authored had helped ensure local elected officials would be able to serve on the Gold Line Board and not have it be considered a conflict of interest.

Torres said the Gold Line would be “an economic engine for the region” and said she would assist in efforts to secure funds for the project and other projects throughout the region.

“It will help us with our traffic congestion,” she said. “It is an environmentally friendly way to move our residents and commuters around the Inland Empire and into Los Angeles, especially the people that have to work out there that make the 10, the 60 and the 210 freeways their everyday commute.”