The following article appeared in the Los Angeles Times on March 15, 2016. 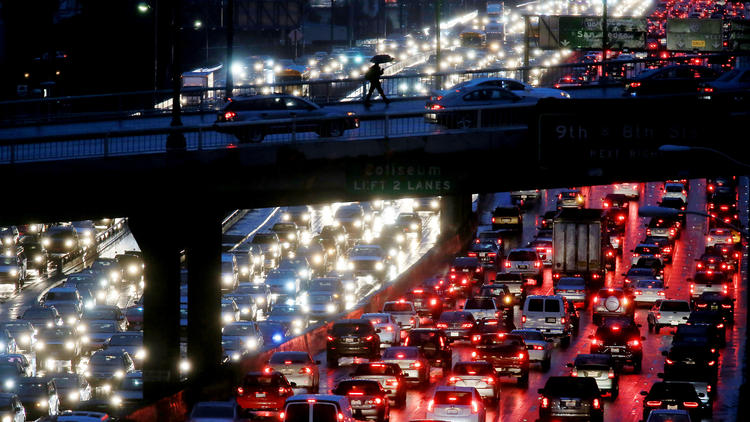 Southern California has, yet again, clinched the dubious distinction of having the country’s worst traffic.

Drivers in the Los Angeles-Long Beach-Santa Ana region spent 81 hours idling on freeways in 2015, the worst cumulative delay of any U.S. metropolitan area, according to a study released Tuesday by the data company Inrix.

The findings should come as no surprise to Angelenos. Traffic remains the top concern for Southern California residents, topping personal safety, housing costs and retirement savings, according to a recent Los Angeles Times poll. 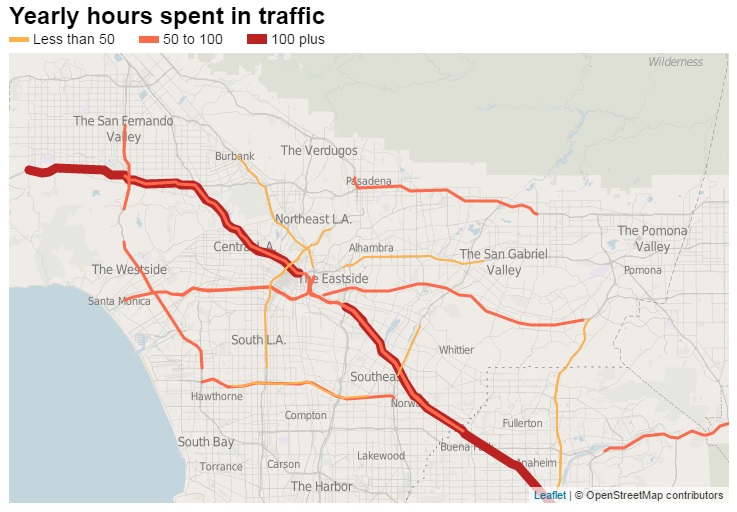 “This validates what people are experiencing,” said Herbie Huff, a research associate at the UCLA Institute of Transportation Studies. Still, she added, “it’s important to recognize that congestion is a sign of good things.”

Although it’s little comfort for those stuck behind the wheel, researchers have long said that heavier traffic is a sign of a healthier economy. Typically, congestion levels dip during recessions because fewer people have jobs.

When the economy roars back, so does traffic. Americans drove a record 3.15 trillion miles last year, shattering the previous record of 3 trillion miles in 2007, according to federal estimates.

The 101 southbound sees the worst delays of any freeway in Los Angeles. On Wednesdays at 8 a.m., the most congested period, drivers move an average of 17 mph and spend 58 minutes longer in their cars than they would if traffic were free-flowing. Drivers on that section of the 101 spend 134 hours per year — about 5 1/2 days — waiting in traffic. 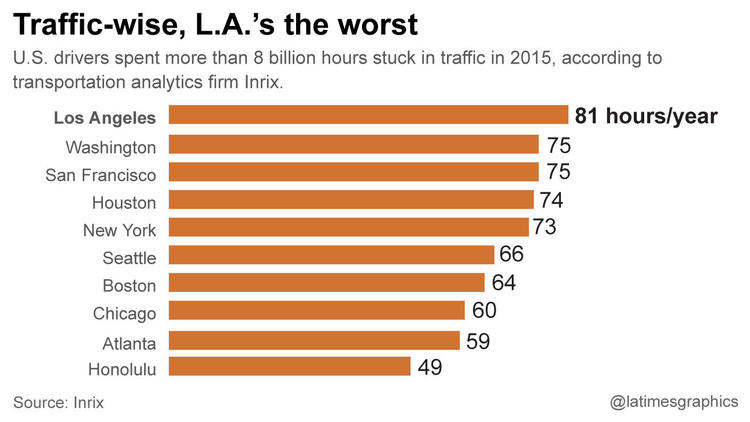 The hour of the week with the worst congestion was 4 p.m. Friday, when six of L.A.’s 25 most congested roads recorded their most sluggish hour.

The study did not include surface streets.

In San Francisco and Washington, the second-worst places to commute by car, drivers wasted about five fewer hours than in Los Angeles last year.

Over the next few years, if gas prices remain low and the economy stays strong, drivers in L.A. and other major cities should expect congestion to increase, said Chris Handley, Inrix’s vice president of product and analytics.

Aside from an economic downturn, the only way traffic will get better is if policymakers charge drivers to use the roads, UCLA’s Huff said.

“Running a rail line parallel to a congested freeway might result in some of the drivers switching to the rail line,” Huff said. “But even if that happens, the new space that you’ve freed up on the freeway will just be filled up again by new drivers — people who had been dissuaded from driving because the traffic was bad.”

Still, some transportation researchers say the advent of the autonomous car over the next 10 to 15 years could slow, or even stop, congestion’s slow creep upward.

Driverless cars are billed as more efficient than human drivers, in part because robot drivers require less space between vehicles. Once autonomous cars make up a higher proportion of vehicles on the road, “you’re going to start to see improvements,” Handley said.

In the short term, Angelenos can take comfort in knowing it could always be worse. In London last year, drivers spent 101 hours stuck in traffic.