The following article appeared in The Source on December 1, 2016.

Metro Board approves next phase of parking fee program – The Source

The next phase of the Metro parking fee program was approved Thursday by the agency’s Board of Directors. The program began earlier this year when daily and monthly parking fees went into effect at three of the new Expo Line stations. (Staff report here)

With the approval, parking fees will be implemented at the following stations:

•Metro would also have the option to later add fees at the Green Line’s Norwalk, Lakewood and Aviation stations and El Monte Station.

The goal is to implement the fees by April. The payment system will be automated and patrons will use their TAP cards to show they rode Metro.

The idea behind the program is help Metro better manage its parking — and to ensure that parking is being used by Metro patrons and that some spaces remain available at any time of the day. When Metro doesn’t charge anything for parking, a lot of non-transit users end up using the space. The fees help discourage that from happening and help raise dollars needed to maintain the lots and keep them safe.

Here’s the chart showing the fees at the stations in the program: 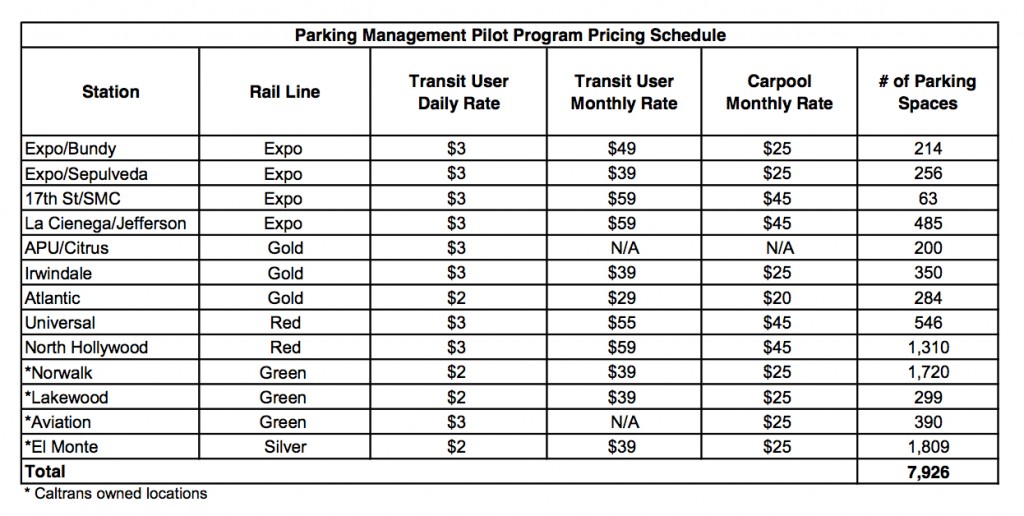