The following article appeared in the Los Angeles Times on March 11, 2016. 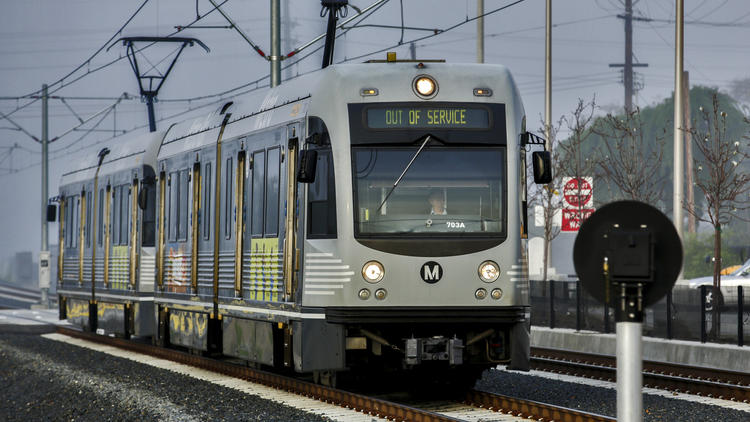 An extension of the Metro Gold Line is among the proposed transit projects that would be funded if voters approve a sales tax increase in November that seeks to raise $120 billion for transportation. (Irfan Khan / Los Angeles Times)

Perhaps no traffic bottleneck in Los Angeles County has frustrated transportation planners and commuters more than the Sepulveda Pass, where the infamous 405 Freeway connects the Westside and the San Fernando Valley.

The Metropolitan Transportation Authority plans to propose a radical step: Pushing a tunnel through the mountains that could accommodate a toll road and a passenger rail line.

The tunnel is one of nearly a dozen major transit projects Metro says it could build if voters approve a $120-billion tax increase proposal expected to appear on the November ballot.

Other projects include rail lines through the San Fernando Valley and southeastern L.A. County, as well as faster bus service on a handful of major corridors, according to two officials briefed on the plan. They spoke to The Times on condition of anonymity because they were not authorized to discuss the matter publicly.

The ballot measure would extend an existing half-cent sales tax for two more decades, and raise the county’s sales tax rate by an additional half-cent for four decades or longer. The measure, which needs a two-thirds majority to pass, would boost Los Angeles County’s base sales tax rate to 9.5%.

Some details have yet to be worked out, the officials said Friday, including the exact division of funding between new transit lines, Metro operations and repairs, and disbursements to municipal governments for local projects, such as paving potholes and painting bike lanes.

As envisioned, the plan would funnel about one-third of the $120 billion into full or partial funding for five new transit lines and at least six extensions of lines that are already built or under construction, the officials said.

The project list appears carefully constructed to gain voter support in all areas of the vast county, with rail lines, highway upgrades and other proposed improvements reaching communities as far-flung as Sylmar, Torrance, Artesia and Claremont.

“In terms of the order of these projects, what’s going to be at the beginning and what’s at the end, and how it’s all rolled out, that’s all being finalized,” Metro spokeswoman Pauletta Tonilas said Friday. “There’s been a tremendous amount of work that went into this, keeping in mind that this is a regional system for everyone in the county.”

She declined to comment on any specific projects until the list is released publicly later this month.

The construction plan could be transformative for traffic-choked Los Angeles County, which began building a modern rail system a generation ago, decades after other major cities. The plan would provide several critical north-south links in a rail network that runs largely east to west, in part because Metro could purchase abandoned rights-of-way for a deep discount.

But critics say the proposal could be a colossal headache for Metro, which sometimes struggles to manage the budget it has now. Despite major investments over the last decade, ridership has dropped on buses and trains. The widening of the 405 Freeway was completed years behind schedule. And the budget for a new rail connection through downtown Los Angeles has increased by $130 million, or 9%, before tunneling has even begun.

Little is known about what happens when a region faces a sales tax of 10% or higher, said Lisa Schweitzer, a USC associate professor in transportation and urban planning. Although Metro’s proposal would increase the county’s base sales tax rate to 9.5%, some cities — including Santa Monica, Culver City and Commerce — have higher rates. 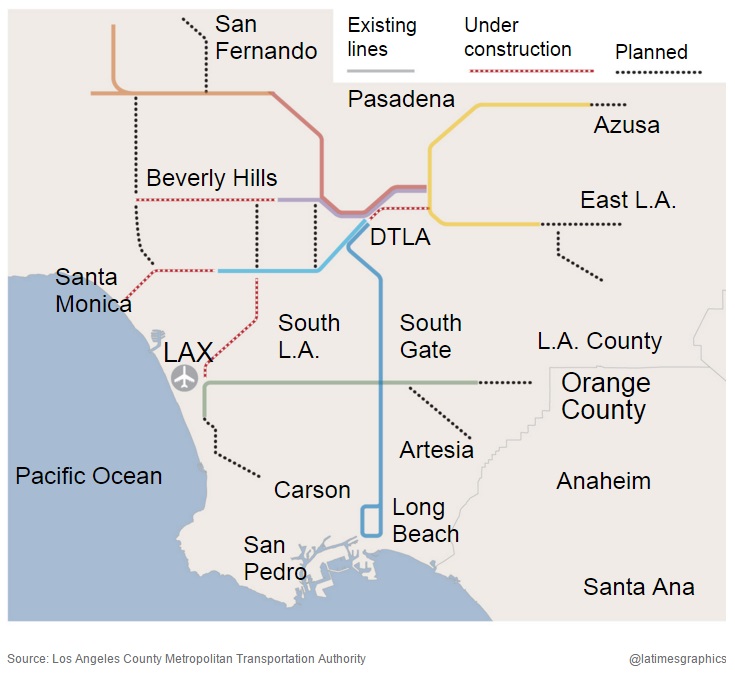 The county electorate has raised taxes three times to pay for transportation projects, in 1980, 1990 and 2008, taxes that largely funded the existing Metro Rail network. The newest tax, known as Measure R, financed the Gold Line to Azusa, the Expo Line extension to Santa Monica, and three other major rail lines. A proposed extension of Measure R failed narrowly in 2012.

“I don’t know that there’s all that much thirst out there for transit,” Schweitzer said. “It is not as germane to peoples’ lives as Metro would like it to be, to keep voting yes and yes and yes.”

The cornerstone of the new proposal is the Sepulveda Pass tunnel, which would link the San Fernando Valley and the Westside. Early estimates place the price tag at $7 billion to $9.5 billion.

The 405 is one of the nation’s most congested freeways, and transportation planners have for decades talked about how to ease the traffic. The idea of a tunnel has been discussed for years, but mostly as a futuristic concept.

Besides the cost and engineering challenges, tunneling could also face political opposition as well. Residents in South Pasadena and other communities have been fighting a plan to tunnel a leg of the 710 Freeway.

The Valley, home to nearly 20% of county residents, has just two of Metro’s 86 rail stations. Metro officials have proposed two major improvements that would directly benefit the Valley, in addition to the Sepulveda Pass project: a bus or rail line along Van Nuys Boulevard and a series of upgrades to the Orange Line busway, including possibly converting it to light rail.

Metro’s board of directors will vote in June whether to place the measure on the November ballot. Some have expressed concern that a crowded field of proposed ballot measures could complicate the initiative’s chances of winning.