The following blog post originally appeared on The Source blog on August 7, 2013. 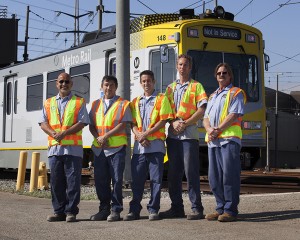 Detail of the new, bright yellow and white reflective markings and paint scheme rail car styling designed by Metro Creative Services. A test “mock up” was applied to an older car model by Lee Hetherington (right) in Blue Line Fleet Services and his capable team.

As previously reported, the Metro Board of Directors recently approved purchasing new light rail vehicles from Kinkisharyo International. Metro’s Creative Services group has since been hard at work creating distinctive styling and graphics for the new rail cars as well as the entire rail fleet.

“The forward looking design is intended to capture the vibrant spirit of Los Angeles,” said Jorge Pardo, Director of Art & Design for Creative Services. “We are seeking to transform Metro’s trains into gleaming, contemporary vehicles that express L.A. as a world class urban center. We’re creating a safer train and doing it with a sense of style that the world now expects of L.A.”

The the workhorse Nippon Sharyo P2020 car were the first in Metro’s fleet to receive the bold reflective yellow markings and white super-graphics overlaid onto painted cool grays of the vehicle chassis (these cars are used on the Blue and Expo Lines). A “mocked up” vehicle with the new trimmings will roll out next week and be under close performance assessment. Slight variations and tweaks may occur until the styling is perfected and agreed to by Metro department stakeholders — they want to make sure the cars work both aesthetically and can be maintained. 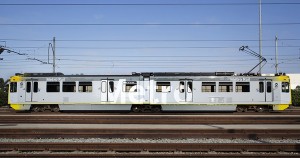 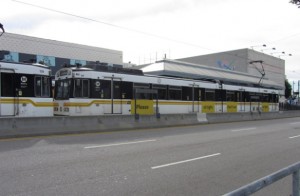 Existing train, featured on the Blue and Expo Lines.

“The increased reflectiveness of the train surfaces is impressive,” said Lee Hetherington, a 16-year veteran Metro Rail Body/Paint Leader in Fleet Services. “These trains are sure to stimulate new ridership. Other transit agencies across the nation will be envious of our bold, fresh looking trains.”

With its new styling, Metro trains will present a cohesive and more visible rolling billboard for the agency county-wide, encouraging discretionary riders and creating a safer and more attractive ride for our customers.

Designs are still being finalized. Stayed tuned for updates in the coming months.

🚧 CONSTRUCTION ALERT: San Dimas Canyon Rd. at the railroad crossing (north of Arrow Hwy.) has reopened to motorists and pedestrians. Over 3-week closure, crews were able to relocate the freight track and complete underground utility work.

🚧 CONSTRUCTION ALERT: Route 66 in Glendora (west of Lone Hill Ave., between Compromise Line Rd. and Hunters Trail) has reopened to motorists and pedestrians this morning

Thank you @CityofGlendora residents & businesses for your patience & understanding during the closure.

After three months of reconstruction work, D St. in La Verne reopened to motorists and pedestrians this past Friday. #TheJourneyContinues 🛤️