The following Opinion appeared in the Los Angeles Times on November 18, 2015. 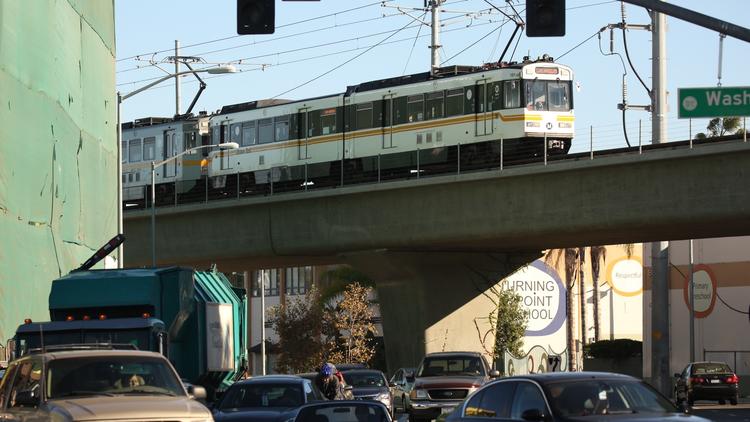 Take note, L.A. political speechwriters and Metro marketing staff: Building public transit may not reduce freeway traffic. You probably want to cite other benefits when urging Angelenos to support a new sales tax to fund rail and bus projects. But, don’t worry, there are plenty of other reasons to expand public transportation.

A new study found that the first phase of the Expo Line between downtown Los Angeles and Culver City “didn’t have a significant or consistent impact on the average speeds of motorists on the freeway and major, nearby surface streets,” the Times reported. That’s contrary to one of the stated objectives of the project — reduce congestion on the 10 Freeway.

Though the rail line has drawn more users — 30,000 daily riders — than projected and helped boost bus ridership, the number of people in the area using transit does not appear to be large enough to affect vehicle traffic in such a congested corridor, according to researchers with USC’s Sol Price School of Public Policy and the Metrans Transportation Center, which conducted the study for the county’s Metropolitan Transportation Authority.

A number of experts in the Times story note that it’s unreasonable to expect a significant effect on traffic with one phase of the Expo Line (the second phase going to Santa Monica is set to open next year), which is just one rail line in a still evolving regional transportation system. That is, don’t judge the impact on traffic until L.A. has a convenient, usable system that rivals the car for convenience.

But is it realistic to promise that public transit can reduce traffic congestion? Highway planners are increasingly talking about “induced demand,” which is what happens when a road is built or widened to ease congestion, but instead leads more people to drive, which results in similar or worse congestion than before the project. The theory is that a slight reduction in congestion encourages people to drive when they might have otherwise skipped the trip, used transit or traveled at a less busy time.

The poster child for induced demand is the recent $1.1-billion, make that $1.3 billion, widening of the 405 Freeway through Sepulveda Pass. The project added a carpool lane but that didn’t improve rush-hour commute times. Even if the Expo Line did entice drivers out of their cars and into the light rail, it’s certainly possible that induced demand kicked in and other people decided to drive.

It’s time to stop measuring the value of public transit in terms of how it affects freeway traffic. Nor should politicians or advocates pitch public transit as the solution to freeway congestion, as they did in 2012 when promoting the Measure J sales tax extension. Official campaign materials said the ballot measure would “build transit lines that take cars off the road.”

As Metro considers a new half-cent sales tax measure, county leaders ought to consider better ways to sell voters on the benefits of investing in public transit. To start, building more rail and bus lines gives commuters realistic transportation alternatives to sitting in a slow moving car. It can allow people to forgo the expense and responsibility of owning a car. Transit projects can spur community reinvestment and economic development. And, having a robust public transportation system is the hallmark of a major city.