The following story originally appeared on the David Allen Blog, a running column feature in the Inland Valley Daily Bulletin, on October 30, 2013.

Pomona Gold Line station would be a fun zone 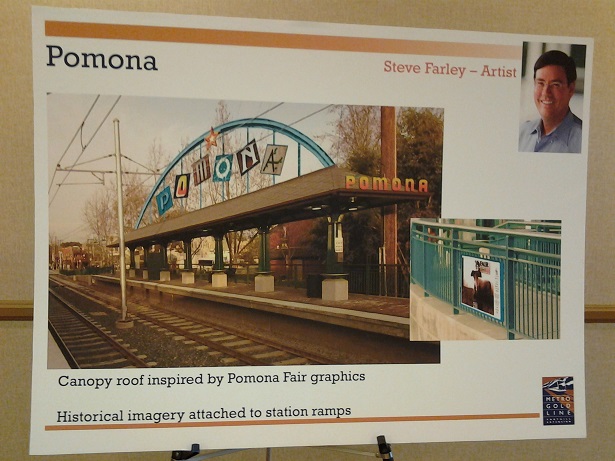 The best part of last week’s “kickoff meeting” for the Gold Line light-rail extension from Azusa to Montclair was the conceptual art for Pomona’s station. Artist Steve Farley incorporated the L.A. County Fair’s old Fun Zone arch — see below — into his station design.

Not only that, but to spell out “Pomona,” Farley used individual letters, ransom note-style, from notable signs around town. Farley, who like the artists for the Glendora, San Dimas, La Verne, Claremont and Montclair platforms was at the meeting, stresses that this is just an initial design and that a committee would help him refine the approach.

Farley explains his concept to me in this video. Note his Bob’s Big Boy T-shirt.

The Ontario native, who grew up across from Chaffey High School, now lives in Arizona, where he’s a rarity, an artist and a state senator. He’s friends with fellow Ontario native Charles Phoenix, the source of the image below. Phoenix says the Fun Zone arch was in existence from 1950 to 1980. “The entrance to the Fun Zone at the fair was one of Southern California’s most spectacular works of neon ever,” he declares.

The $950 million Gold Line extension may never be built, as currently there’s no funding source, but never count it out. If nothing else, they should build Pomona’s station. Put it on wheels and cart it around town. 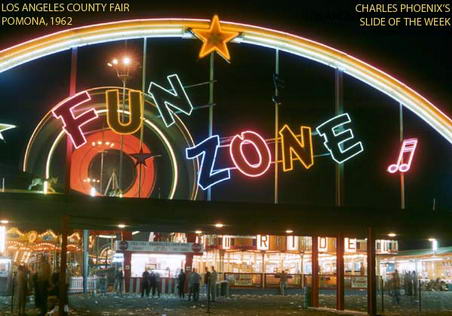