The following article appeared in the Los Angeles Times on February 23, 2015. 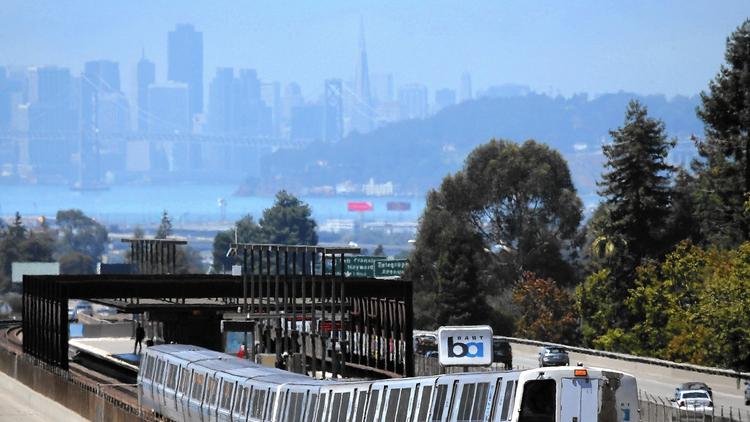 By Dan Weikel and Soumya Karlamangla

San Franciscan Rian Adams has broken her reliance on the automobile. Parking in the city’s congested urban core where she lives and works is too much hassle, and her two-mile commute typically takes five minutes on BART.

Around town, the 34-year-old says, “I don’t drive anywhere.”

Nor do a lot of others in the City by the Bay.

In stark contrast to car-dependent Los Angeles, studies show that most trips in the burgeoning tech metropolis are now made by modes of transportation other than the private automobile.

Travel surveys by the San Francisco Municipal Transportation Agency have shown that more than half of all trips — 54% in 2013 and 52% in 2012 — involved public transit, walking, bicycles and various car-share or ride-share operations such as Uber and Lyft.

Researchers found that 25% of the trips, whether commuting to work, going to dinner, shopping or other outings, were on transit, while nearly as many — 23% — were on foot. Use of a bicycle, taxi, car-share or ride-share accounted for 4%. In 2012, trips were split 50-50 between personal vehicles and the other modes.

Some earlier and admittedly less accurate studies done a few years ago found that more than 60% of trips involved private vehicles.

Driving solo still was the leading means of getting around in San Francisco last year, representing 27% of all trips. Carpooling accounted for about one in five private vehicles trips — double the national average.

“We are encouraged,” said Tom Maguire, director of the transportation agency’s Sustainable Streets program. “The goal is to make walking, cycling, transit and ride-sharing so attractive that people will choose to get around that way.”

Transportation experts say the city’s compact development pattern is especially conducive to leaving the car behind — and contrasts sharply with the urban sprawl and high rates of solo driving prevalent in Los Angeles.

At 47 square miles, San Francisco is relatively small and densely populated. There are more than 17,000 residents per square mile — twice that of Los Angeles.

Moreover, the city has numerous walkable neighborhoods, a dominant commercial and residential core, and a far stronger tradition of transit use across socioeconomic classes.

And, of course, it has some of the worst rush-hour congestion in the nation along with scarce, high-priced parking in the central business district.

Whitney Miller, who lives in Oakland and usually takes BART to her job at a landscape architecture firm in San Francisco, says Bay Area residents gravitate to public transit partly because they are “a little bit more self-conscious” about their greenhouse gas footprint.

But mostly she suspects the city’s “unbearable” traffic and parking are pushing people to seek other ways to get around.

“I drive sometimes, but driving home is really awful,” says Miller, whose 11-mile commute home can take an hour by car. “There’s nowhere to park when you do drive here.”

Alan E. Pisarski, a transportation expert and author of a series of books on American commuting, said gentrification and urban core population growth that rivals or exceeds the suburbs also are affecting transportation preferences in San Francisco.

When those factors occur, “all the transportation options begin to fall into place,” Pisarski said.

Like San Francisco, the Los Angeles area is moving rapidly to expand transportation options, with tens of billions of dollars of new investment in rail lines, carpool lanes, ride-sharing programs and bicycle routes. But Pisarski and other transportation experts say the nation’s second-largest city faces major challenges not shared by its counterpart to the north.

Los Angeles has an entrenched car culture and the city alone is spread out over nearly 10 times the area of San Francisco. Its population density of 8,100 people per square mile is less than half that of the Bay Area city.

Countywide, the land area is an enormous 4,752 square miles, and the density drops to about 2,100 people per square mile. Across this vast region are many large job centers, making downtown Los Angeles less significant as a destination.

Though not strictly comparable to the San Francisco survey, which involves a random sample of residents and asks different questions, the U.S. Census Bureau’s American Community Survey has found that 77% of commuters in L.A. drive to work alone or in carpools, 11.4% take public transit and 11.6% use other ways to get around.

In the larger county region, 83% of commuters drive to work alone or in carpools and just 7.3% use public transit.

“As these systems mature and land use changes, I think the transit share will increase,” Ikhrata said. “Will we get to 50% like San Francisco any time soon? No. Are we heading in the right direction? Yes.”

Maguire said the most recent survey results for San Francisco show that the region’s transportation agency is meeting its goal of having less than half of all trips made by private vehicle.

That’s likely to suit Grant Bruce, who opened the Nano Cafe in San Francisco’s Mission District five months ago. He chose the location because it was near a transit stop. His commute from the Twin Peaks neighborhood in the geographic center of the city takes about 15 minutes.

A resident of San Francisco for more than two decades, Bruce has always relied on public transit. He doesn’t even have a driver’s license.

“The driving thing leads to the parking thing,” he says. “I don’t need it.”

robert
Construction Update and Picture of the Week