The following article appeared on the KPCC news site on February 18, 2016. To listen to the radio segment, click here. 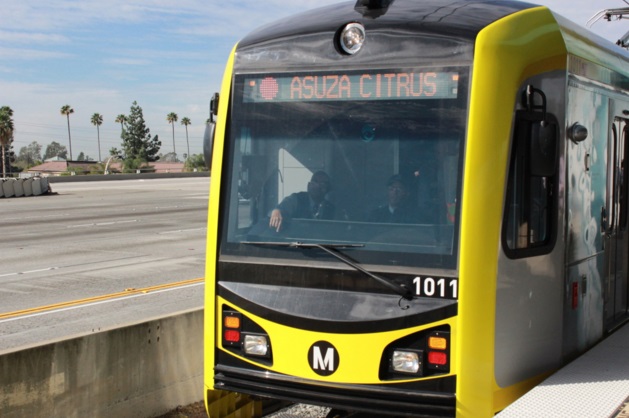 The public will have to wait until March 5 to ride the 12 new miles of the Gold Line’s latest extension, but some got the chance to take the train for an early spin on Wednesday.

“This Gold line extension parallels the 210 freeway, so it provides a much-needed alternative to driving on the 210, which we all know is increasingly busy and congested,” Metro spokesman Dave Sotero said.

Metro projects the Gold Line extension will carry more than 13,000 people a day by 2035.

The rail extension cost $1 billion and is the first completed project undertaken with funds from the Measure R half-cent sales tax approved by Los Angeles County voters in 2008.

The extension adds to the 87 miles of rail currently carrying passengers in L.A.

“That brings us almost to triple digits,” Sotero said.

The Expo Line Phase 2 to Santa Monica is expected to open in May, although no official date has yet been announced.

“We’re talking about really changing the face of L.A. County,” said Washington of the two projects. “These mobility options will only better our way of life and our quality of life.”

The agency is gearing up to put another sales tax measure on the November ballot to fund more construction projects, including a possible extension of the Gold Line to Claremont.

Metro has drawn criticism for expanding rail lines at a time when ridership has been declining.

Washington said he expects ridership to increase with the two new rail line openings, demonstrating to more people the importance of building out the region’s transportation system.

“I think it can only help the ballot initiative,” he said. The Metro Board will not officially vote on whether to move forward with the measure until June.

Metro will offer free rides on the entire length of the Gold Line on March 5 to mark the opening of the Foothill extension. Several of the six new stations plan community events with music and food.

A new express bus connecting Pasadena to the Orange and Red lines in North Hollywood launches just before the Gold Line extension on March 1.