The following article appeared in The Source on February 17, 2016.

Video: Preview the Gold Line Foothill Extension from the operator’s cab – The Source 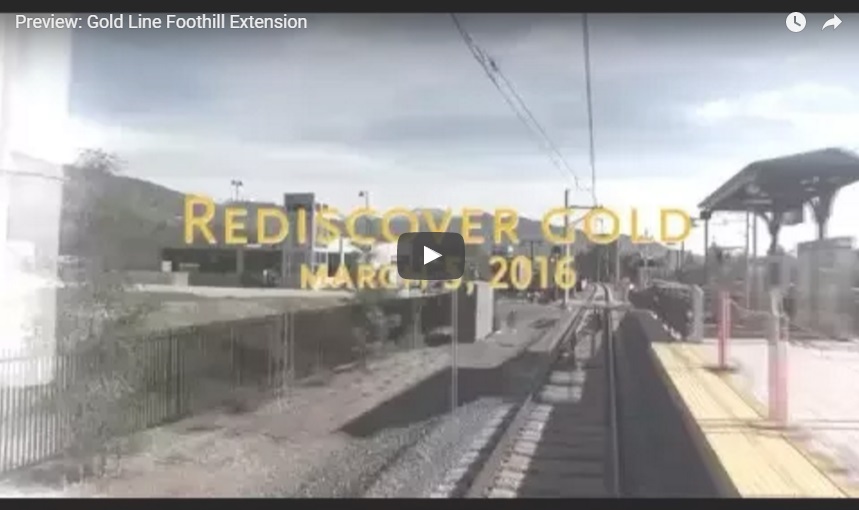 The 11.5-mile extension to Azusa opens on Saturday, March 5. The Gold Line to Pasadena currently ends at Sierra Madre Villa Station. Soon there will be six new stations: Arcadia, Monrovia, Duarte/City of Hope, Irwindale, Azusa Downtown and APU/Citrus College, which is also adjacent to the Rosedale development.

Pre-revenue testing and training has been underway along the alignment. The Metro Board of Directors is taking their inaugural ride this morning: 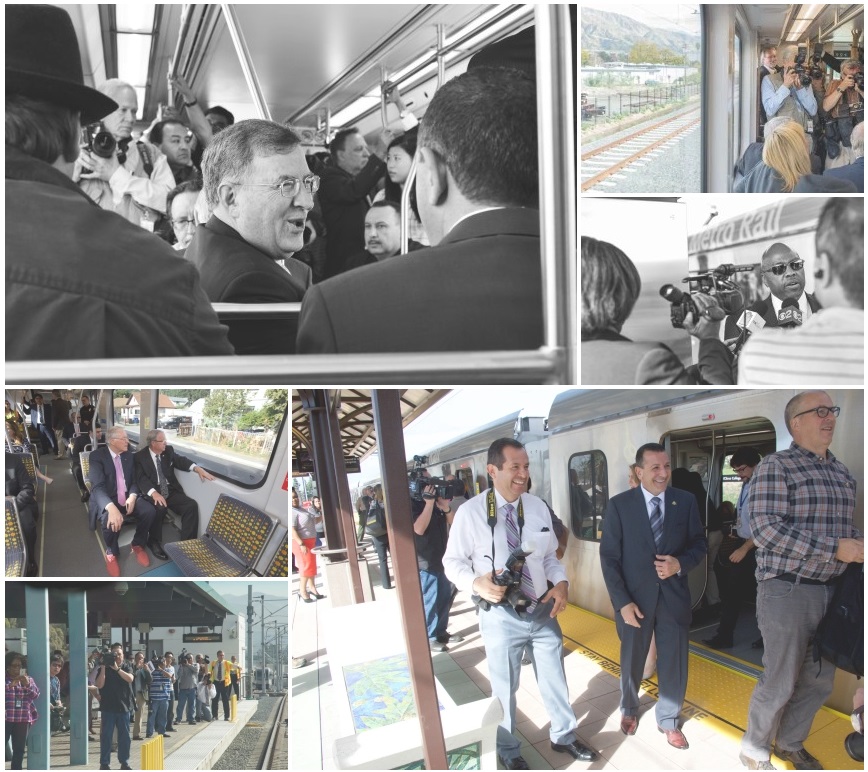 Best things about the new P3010 rail car is? Seating layout. Gone are the three-in-a-row seats that cut into the legroom of the seats adjacent and force you to make the difficult decision of “stand or squeeze into the middle seat.” All seats are now two-by-two with considerably more leg room (at least, that’s how it feels) and, yes, the seats are wider.

The new seats are 16 inches across — on an airplane this would be misery, but on the train it’s really quite nice. I’m half and half on the reconfiguration of the seats on either side of the operator cab door. On the plus side, you’ll no longer block the door of the cab with your legs. But, you’ll be facing the rest of the train car and probably end up making uncomfortable eye contact with people looking your way as they check the screens above your head.

Speaking of the screens: there are two per car and they are excellent. They clearly show which station the train is at and which stops are remaining on the line.

I’m also a big fan of the phosphorescent exit path floor markings. I’d seen the markings before but didn’t know they were glow in the dark — an added safety measure to help make it easier for people to identify where exits on the train are in the event of darkness. It’s difficult to tell the markings are phosphorescent in the daytime, but not impossible. Amuse yourself as I did by casting your shadow across the lines to see them glow. (I’m easily amused, what can I say.)

Finally, in my initial review I mentioned the extra large decal that marks the designated bicycle/luggage/stroller area. I still love it. I love that it’s big and bold and in your face so you can’t pretend you didn’t notice it. No more blocking doors with your bicycles and oversized bags, people. Use the space provided.

Some pics from the new rail cars:

Finally, here’s the map of the new extension:

This is the first Metro Rail project to open that was funded by Measure R, the half-cent sales tax increase approved by Los Angeles County voters in 2008.

Between now and March 5, we’ll post a lot of details about the project and the communities to be served by the Gold Line. There’s also a ton of info already online at the “Rediscover Gold” page on metro.net, including details of the events to be held on opening day.