The following article appeared in the Pasadena Star-News on February 10, 2015. 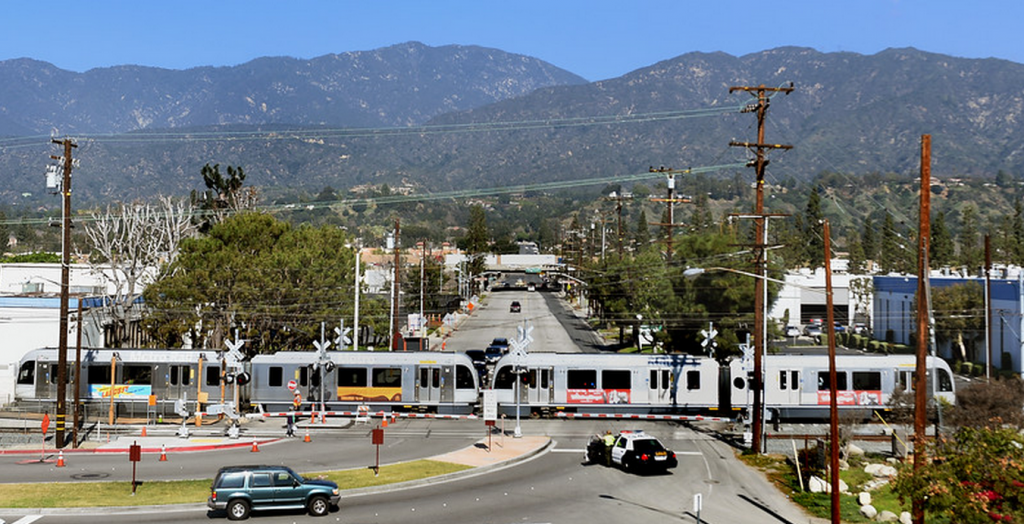 The foothill communities have started to see the first trains going back and forth along the Gold Line light-rail tracks, as train testing began earlier this month.

The trains will be traveling along the 11.5-mile Foothill Gold Line corridor between Pasadena and Azusa through this summer, Gold Line Construction Authority officials said.

Testing is currently taking place in sections of Monrovia, Duarte and Irwindale as well as along the freeway median and is expected to extend across the entire light-rail route over the next several months. The physical elements are tested first, such as the track, wires and platforms, to make sure they function, before a test train is brought in to make sure the train will physically clear the path and the power system is working, construction authority spokesman Albert Ho said.

“Once the system has passed initial tests that ensure that the elements are working properly, and the train clears all necessary elements, the bulk of the work turns to testing of the train control and communications systems,” Ho wrote in a statement. “Tests are conducted to make sure that the location of active trains are communicated accurately and reliably back to the Rail Operations Center (ROC), which acts like an airport control tower for Metro’s entire light rail system.”

As a result of the train testing, some construction activities will start at 3:30 p.m. and conclude by 11 p.m., officials said. All sound walls are now installed and the activities that will be performed during the shift will generally be of low impact to the surrounding communities. Operations that generate excessive noise will conclude by 9 p.m. near homes, officials said.

Construction authority officials also sought to remind the public to stay safe around trains while they are active along the Gold Line corridor. Advice included: never walk on train tracks; never go around lowered gates; obey all warning signs; and watch for trains from both directions.

The Pasadena to Azusa segment is fully funded by Los Angeles County’s Measure R and is on budget and on schedule to be completed in late September of this year, when it will be turned over to Metro for pre-revenue service. Metro will determine when passenger service begins on the line, construction authority officials said.

For more information, go to www.foothillgoldline.org/construction_phases/construction-updates/.