As 2010 comes to an end, we thought we should end the year with a quick overview of the many milestones reached these past 12 months:

It has truly been a momentous year and we are glad you have been a part of it.

As we leave 2010, here is a quick video of folks we met out in community over the last year from Arcadia to Claremont and what the Foothill Extension means to them. 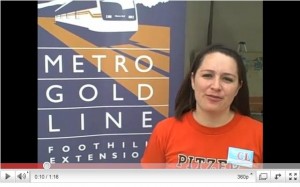 Year ends with a high note!
The State of Federal Transportation Funding