Additional coverage of this historic milestone can be seen at the Los Angeles Business Journal, Metro’s The Source, Curbed LA, Engineering News Record, KFI AM 640, Globe St and Progressive Railroading. 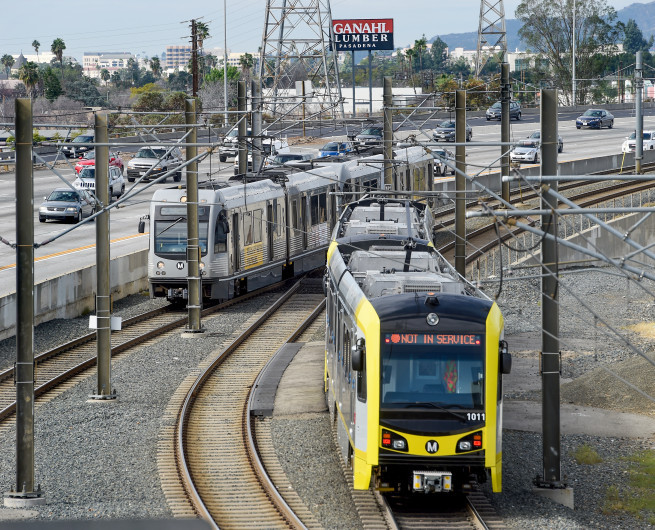 The main design-construction contract was awarded Wednesday, Aug. 14, to extend the Gold Line light-rail into Pomona by 2025, a milestone that appeared uncertain as late as last week.

A joint venture between contractors Kiewit and Parsons — the same team that constructed the line from Los Angeles to Pasadena and later to Azusa — will build it out 9 miles from Citrus Avenue in Glendora to Garey Avenue in Pomona for $805.6 million.

Part of the contract approved by the Gold Line Foothill Extension Construction Authority board Wednesday includes a two-year option to expand the light-rail farther, to Claremont and Montclair, to provide a new transit option for commuters in the Inland Empire working in Pasadena and Los Angeles.

Outside of Union Station, the Pomona Gold Line station will mark the first built next to a Metrolink station. Metrolink is commuter rail that runs large-scale diesel-powered locomotives with limited stops and service. Having both gives a commuter the option to ride Metrolink to Pomona, then take the Gold Line to cities along the foothills, said John Fasana, Duarte mayor and board member of the Construction Authority and Los Angeles County Metropolitan Transportation Authority.

A one-way adult ticket on LA Metro Rail or bus costs $1.75 per ride, as compared to $9 on Metrolink from Pomona North to LA Union Station. (Metrolink is currently running a sale, reducing the one-way ticket to $6.75).

“I can see someone from eastern San Bernardino take Metrolink to Pomona, changing trains to take the Gold Line to Pasadena,” Fasana said. He believes the convergence will reduce traffic on the 210 and 10 freeways.