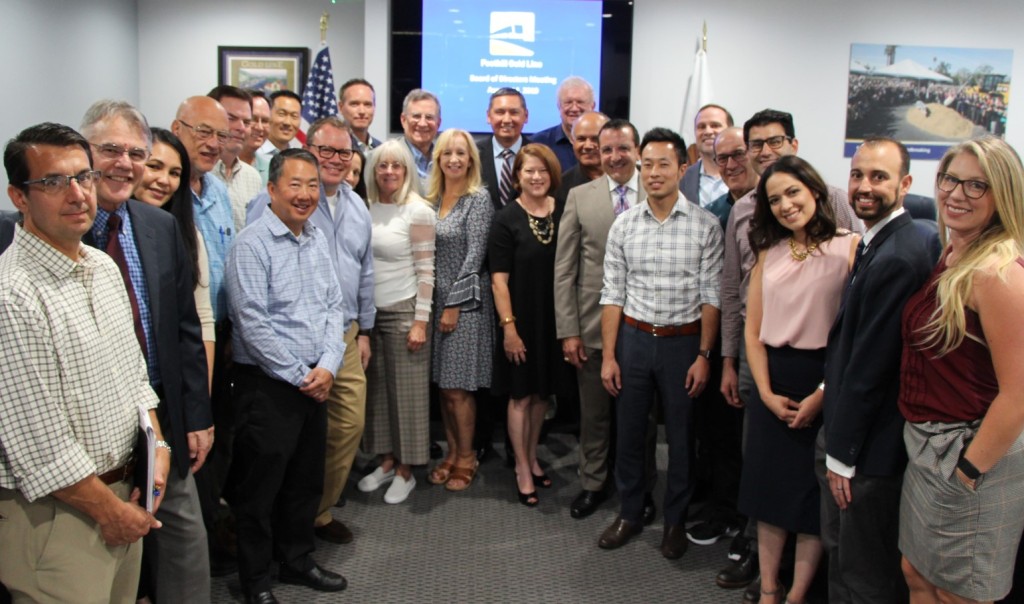 The Foothill Gold Line light rail extension from Glendora to Montclair reached a major milestone today when the Construction Authority Board of Directors awarded the main design-build contract to Kiewit-Parsons, a Joint Venture.

The awarded design-build contract includes an $805.6 million base scope for the first nine miles of the project from Glendora to Pomona, with a two-year contract option to complete the full 12.3-mile project to Montclair for a total contract award of $1,186.9 million if additional funds are secured by September 2021. The base scope includes all elements of design and construction for the first nine-mile segment, including relocation of the existing freight track, installation of the light rail track system, four new light rail stations (in Glendora, San Dimas, La Verne and Pomona), improvements at 40 grade crossings (nearly half with new or renovated bridges) and much more. The contract option would extend the work of the design-build team to complete the full 12.3-mile project to Montclair and add stations in Claremont and Montclair.

The proposal by Kiewit-Parsons was deemed the best value for the agency following a nearly two-year procurement process. Their final proposal resulted in the team being ranked highest in all technical evaluation categories, and provided the lowest bid price based on the formula set out in the RFP for the base scope to Pomona and contract option to Montclair.

Kiewit and Parsons have teamed up dozens of times to complete design-build projects, including successfully building the first two segments of the Foothill Gold Line project which were completed on time and under budget in 2003 and 2015 respectively. They have designed and built hundreds of major infrastructure projects, and both are award-winning companies, providing world-renowned experience

With the award today, the project will begin major construction in 2020 and take approximately five years to complete to Pomona and eight years to complete to Montclair, if the contract option is activated. It is estimated that during construction alone, the Foothill Gold Line project will create more than 16,000 jobs, $2.6 billion of economic output for the region, as well as $1 billion in labor income and $40 million in tax revenue (according to a study by Beacon Economics).

The Construction Authority and Kiewit-Parsons JV will spend the next several weeks finalizing the legal and financial paperwork to execute the contract, before the Construction Authority will issue a “Notice To Proceed” to formally start work. It will likely take the rest of this calendar year for the team to finalize project design, before major construction can begin early next year.

“This team presented the best of both worlds; the top ranked team in all technical categories and the lowest bid price based on the formula set out in the RFP for the base scope to Pomona and contract option to Montclair. I am happy with the outcome and the selected team and applaud the significant effort staff at the Authority put into conducting this procurement. Ultimately, we had two excellent teams vying for this important project, and the best proposal won.

It took an amazing team effort to reach this important milestone for the project. The dedication by the Metro board and staff to the project is clear, our local state officials came through with funding earlier this year, and just last week 27 members of the San Gabriel Valley Council of Governments unanimously supported additional funding be allocated so today’s award could be possible. It took heavy lifting by everyone, and we at the Construction Authority are not taking that lightly. We are ready to go to work and ready to deliver another successful project for this region.”

“Metro has made completing the Gold Line to Claremont a county priority project for many years, and today’s award is an important step to making that vision a reality. While we still have work to do to ensure the line is completed to Claremont, today’s contract award ensures completion of the first project phase to Pomona. We remain steadfastly committed to delivering this transit project for taxpayers and extending the Gold Line’s mobility benefits to new San Gabriel Valley communities.”