The following article appeared in the Santa Clarita Valley News on March 25, 2016. 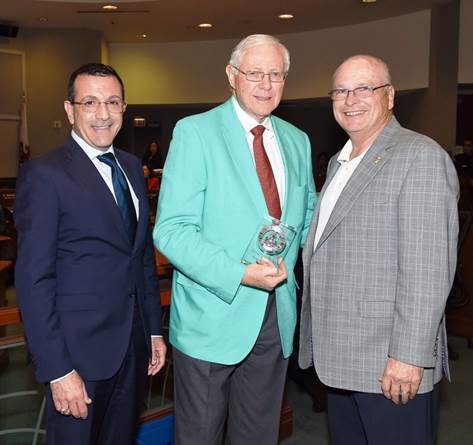 Supervisor Michael D. Antonovich was honored by the Gold Line Construction Authority for his leadership over the past 20 years driving the development and construction of the Gold Line rail system.

This month, the Gold Line was extended to stations opened in Arcadia, Monrovia, Duarte, Irwindale and Azusa from Pasadena, which opened in 2003.

“The Gold Line is a vital component in our county’s regional transportation system and will serve as the economic engine for the San Gabriel Valley,” said Antonovich. “I appreciate this recognition and thank CEO Habib Balian and directors Doug Tessitor, Sam Pedroza, Marisol Rodriquez, Paul Leon, John Fasana, Gene Masuda, Carrie Bowen, Daniel Evans, Alan Wapner from our partner cities, South Pasadena, Pasadena, Arcadia, Monrovia, Duarte, Irwindale and Azusa, our town councils, and the community whose efforts have kept the Gold Line on-time and under-budget. We also look forward to working together to continue construction east to Claremont and onto Ontario Airport, and westward to an expansion from Pasadena to Glendale, Burbank, North Hollywood and the Bob Hope Airport.”