The following article appeared on The Source on February 19, 2016.

Click here or on the image below to play. 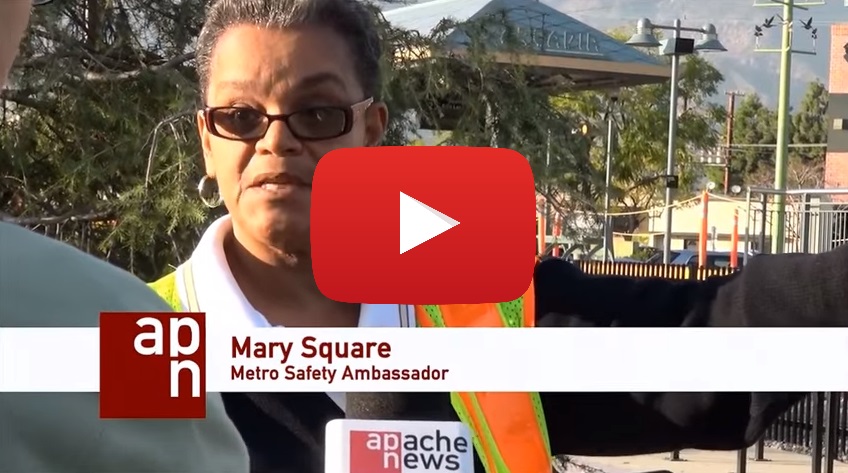 Here’s the news release from Metro:

Motorists and pedestrians are reminded to always “Stop, Look and Listen” before crossing the train tracks along the alignment of the new Metro Gold Line Extension from Sierra Madre Villa to Azusa. The new 11.5-mile extension is Metro’s latest effort to ease traffic congestion and is set to open to the public on Saturday, March 5. In preparation for opening, Metro is now operating additional test trains while getting ready for opening day.

Metro has undertaken a number of initiatives to ensure that the Metro Gold Line operates with the utmost safety and security. Gold Line trains have the right-of-way and motorists and pedestrians should never attempt to cross the train tracks when a train is approaching.

“Safety and security is priority number one as we gear up for the opening of the new extension of the popular Gold Line,” said Metro CEO Phillip Washington. “All motorists and pedestrians are encouraged to be alert and watch for the presence of trains during the advance testing period and ultimately when we open the system in March to our customers.”

Safety outreach for the new extension of the Metro Gold Line began in December 2014 through the agency’s Transit Safety Programs (TSP) in an effort to give informative safety programs and presentations to the community. Since that time, TSP has conducted safety presentations to over 25,000 K -12 and college students at schools within a 1.5-mile radius of street-running trains.

TSP deployed Rail Safety Ambassadors at 11 grade crossings along the new extension. They are stationed along the alignment from 6 a.m. to 6 p.m. Monday through Friday. Ambassadors are retired bus and rail operators who are fully trained in safety rules and regulations. They assist pedestrians, bicyclists and motorists at rail crossings, answer Metro-related questions, provide safety education to the community and report safety-related issues to the agency.

In conjunction with providing  resource tables at local events, Metro has begun sending out safety messages and testing notices to the community through the NextDoor App,  bringing  TSP’s outreach total to over 41,000 people and counting.

Metro also contracts with the Los Angeles County Sheriff’s Department to patrol all Metro-operated buses and trains including the Metro Gold Line’s new extension in the San Gabriel Valley. The Sheriff’s Department works collaboratively with Metro’s transit operating supervisors, its transit security unit and Metro Gold Line management to help ensure a safe ride for all our patrons.

Sheriff’s deputies and security personnel will patrol Metro Gold Line stations during all hours of operation. Metro transit Sheriff’s personnel’s full-time policing and security measures will include vehicle and foot patrols onboard the trains and in passengers stations. Motorcycle deputies will also patrol the Metro Gold Line right-of-way full-time to ensure the safe passage of rail patrons, motorists and pedestrians.

The $1-billion Metro Gold Line extension in the San Gabriel Valley extends the line from its current terminus at Sierra Madre Villa Station in eastern Pasadena for 11.5 miles to Azusa. There are new stations in Arcadia, Monrovia, Duarte/City of Hope, Irwindale, Azusa Downtown and APU/Citrus College. The extension portion of the line is anticipated to carry 13,600 boarding passengers on an average weekday by 2035.

The rail extension was funded by Measure R, the half-cent sales tax measure approved by the voters of Los Angeles County in 2008. The extension was built by the Metro Gold Line Foothill Extension Construction Authority, an independent transportation planning and construction agency. The extension portion of the line took approximately five years to build, with major construction completed in September 2015.