The following article appeared on The Source on March 11, 2016.

You spoke, we (Metro) listened: parking update and Gold Line to have some longer trains on Monday – The Source 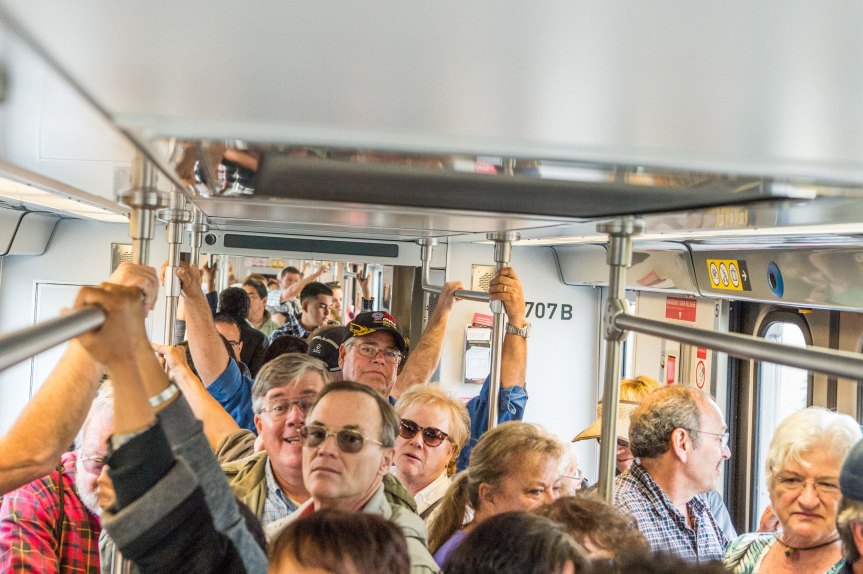 Some news today about parking on the Gold Line extension to Azusa:

• An extra rail car will be added to four Gold Line trains during weekday peak hours in the morning and evening to help with crowds. We know the trains have sometimes been very crowded during the height of the rush hour and hopefully this will take the edge off. Metro staff will be monitoring ridership so that the longer trains can be deployed when the most needed.

• Metro will soon be putting parking attendants at APU/Citrus College, Azusa Downtown and Irwindale stations between 5:00 a.m. and 10:30 a.m. on weekdays. The attendants will be helping patrons find spots at each station or direct them to another station where there is parking available. And to answer your next question: yes, the attendants will be talking to one another to monitor space availability at the garages.

The attendants will also have another key role: prevent people who aren’t using Metro from parking in Metro spaces in the garages. In addition, attendants will be posting signs when stations fill and will have direction handouts to help patrons find the other garages.

The Irwindale Garage is located just south of the 210 freeway on Irwindale Avenue. There is an entrance on the west side of Irwindale Ave. and from Avenida Padilla. Photo by Frank Ching/Metro.

• Also, Metro staff were at each of the stations on Tuesday and Wednesday counting how many cars were parked. As you can see from the chart below, the main challenge is at the two most eastern stations, Azusa Downtown and APU/Citrus College. Irwindale seems to be the better option.

Interestingly — and not surprisingly — the parking at the six new stations seems to have taken some of the pressure of the Sierra Madre Villa Station garage that until Saturday was the previous final Gold Line Station.

Here are some tips for parking at the new stations or reaching them by other means:

Get there early. Arrive as early as you can to get your parking spot.  While there are about 1,500 parking spaces available at six different stations, some stations, especially those in Azusa, are filling up early every morning.

Try another  station. See the chart above.

Share the Ride. Carpool with a buddy or workmate to the station and ride the train together.

Kiss and Ride. Have someone drop you off at the station.  Each station has a convenient passenger drop-off area.

Walk to the station. If you live close to the station, try walking instead. Each station features pedestrian-friendly improvements like enhanced crosswalks, sidewalks, pedestrian street lights, benches and ramps.

Ride a bike. Each station has up to 20 bike racks and 24 bike lockers for bicycle commuters.

Take a bus. There are numerous Metro, Foothill Transit and city-operated bus and shuttle lines that will bring you to new Gold Line stations from surrounding communities. Below is a complete list of connecting bus lines as well as other key station information:

Here’s the information on the bus systems in Arcadia and Duarte, both of which serve the new Gold Line station: